In a blog post published sometime ago, Multitenant applications using Spring Boot JPA Hibernate and Postgres I included some code to set to and to retrieve from, the tenant identifier (a discriminator for selecting its associated datasource) using a ThreadLocal reference:

I normally try to avoid using ThreadLocal and would also advise to limit their usage. They can be handy, solve difficult problems but can also introduce memory leaks.

In this post I discuss how to use Spring’s ThreadLocalTargetSource to prevent dealing directly with the dangerous ThreadLocal while practicing dependency injection and proper mocking in unit tests.

Note: This approach would still use a ThreadLocal reference, but delegates setting it, injecting it and clearing it, to the Spring framework.

This command will create a Maven project in a folder named threadlocaltargetsource-demo with the actuator and web-related Spring Boot dependencies.

Tip: Read on if you are interested in adding Spring Boot dependencies using the bom approach.

Let’s take a look at the relevant classes included in this demo application:

This class serves as the tenant data holder.

The other beans look interesting:

This class implements a simple API in which a TenantStore.java instance is injected.

We will see later how it would appear there is only one instance of TenantStore.java class for different requests, each holding different tenant data.

This servlet filter takes care of setting the tenant identifier to the TenantStore.java holder and clearing it up during the servlet filter chain’s way out.

We will see later how it would appear there is only one instance of TenantStore.java class for different requests, each holding different tenant data.

4. PACKAGING AND RUNNING THE APP

This application can be run from your preferred IDE as a regular Java application or from command line:

Let’s place a breakpoint in the TenantFilter.java class: 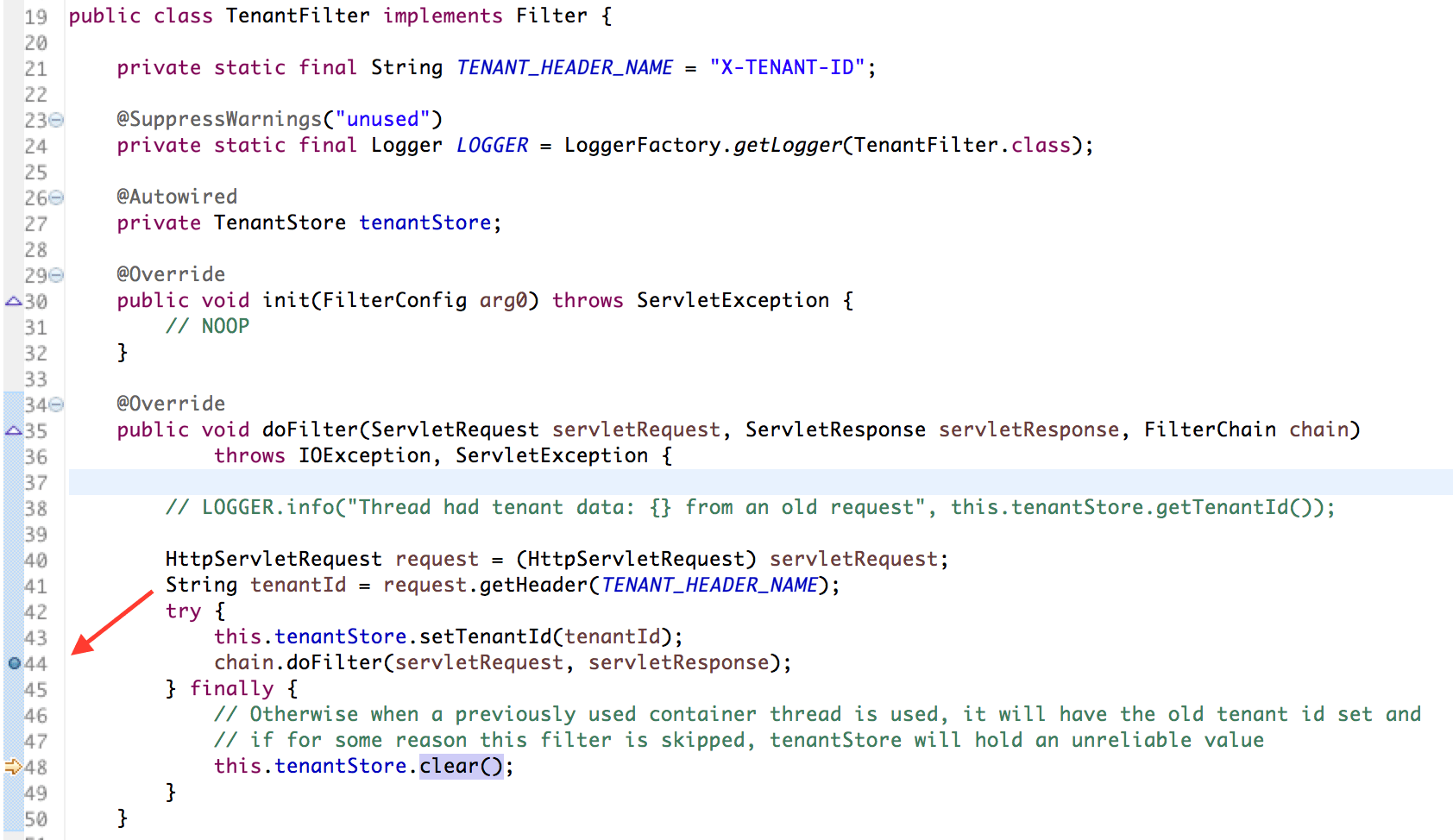 and send a couple of simultaneous requests to the /demo endpoint:

Both requests should have been suspended in the Tenant filter breakpoint, lets take a look at partial stack traces and attributes values:

As for the second request, tenantStore's id is also 119 but the tenantStore's tenantId is set to tenant_2. Interesting eh. All these while both requests are still being processed. Also notice http-nio-8080-exec-1’s stack trace which corresponds to processing request #1.

As the execution of the requests is resumed, the response to the first request looks like:

and the response to the second request:

Let’s now see how a unit test for the DemoResource.java class would look like:

Tip: Read on if you are interested in learning how to Split Unit and Integration Tests using Maven and Surefire plugin or Reporting Code Coverage using Maven and JaCoCo plugin.

TenantStore dependency is being mocked using Mockito and injected in the API implementation. A case could be made to prevent using @InjectMocks but that goes out of the scope of this post.

to how I used it earlier this year:

which is error-prone since the ThreadLocal would have to be cleared in every test that follows this pattern to prevent a possible misuse if another unit test that uses the same ThreadLocal runs in the same thread.